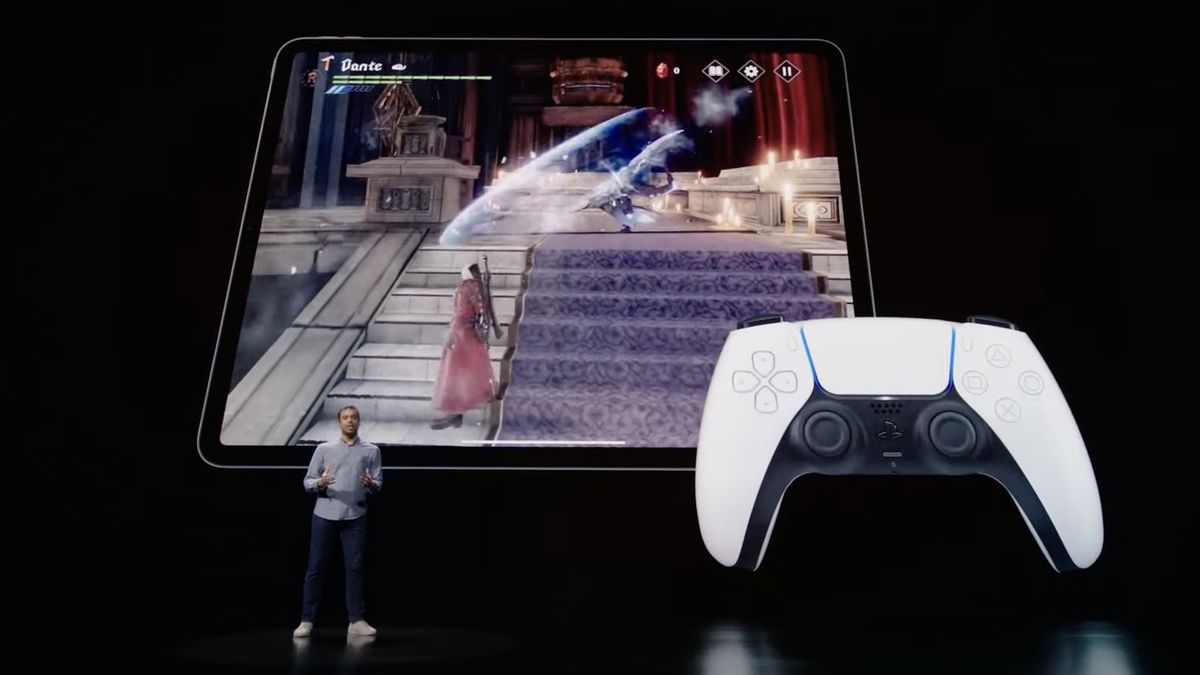 During its Spring Loaded event, Apple claimed its new iMac 2021 and iPad Pro 2021 with M1 chips are both excellent gaming machines. The iMac allegedly has the power to run Apple Arcade and Zoom simultaneously with ease, while the iPad Pro will allegedly have ‘console-quality’ graphics and frame rates.

Apple already proved with the M1 MacBook Air that the M1 chip could run iOS games with ease. But the new M1 iMac and iPad Pro both have the specs to take the crown for the best Apple gaming machine, and could potentially handle more rigorous PC games.

Each device has the same M1 CPU, so which Apple device is better for gaming? For anyone considering pre-ordering the iPad 2021 or iMac 2021 to play games, we’re breaking down the specs and features to help you decide.

Comparing the most expensive versions of the iMac 2021 and iPad Pro 2021, both sport an 8-core Apple M1 chip with 4 performance cores and 4 efficiency cores, an 8-core GPU, up to 16GB of RAM, up to 2TB of storage, and a 16-core Neural Engine.

Basically running off of the same hardware, both devices could have comparable graphics performance. Of course, the different operating systems and respective display sizes will use the same resources in unique ways.

In other words, the iPad Pro 2021 may give you a more visually stunning experience with faster refresh rates for competitive gaming, but the iMac 2021 is no visual slouch and offers nearly twice the gaming real estate.

iPad Pro gamers can technically use the USB-C connector to connect an external display like the Pro Display XDR – as can the iMac if you want a dual gaming display. Both displays have wide color (P3) and true tone technology for equally vibrant colors.

If you’re someone who prefers computer audio to gaming headphones, the iMac has six speakers, force-canceling woofers, and support for Dolby Atmos, while the iPad has just four speakers and generally less room for powerful sound.

Both devices support Wi-Fi 6 for fast game streaming and Bluetooth 5.0 for reliable connections to gaming accessories. The difference is that the iMac has more USB 3 and Thunderbolt 4 ports for manually connecting to accessories, plus an ethernet port built right into the power adapter for consistent internet speeds.

At the moment, we can only judge how these two devices will compare, based on Apple’s own vague benchmarks.

First, Apple claimed that the 2021 iMac is 85% faster than the previous iMac. Then it made the bold claim that the new iMac’s GPU performance will be twice as fast as any other integrated GPU on the market today.

After the Spring Loaded event, we sat down with Apple and asked about performance differences between the iPad and iMac. It mostly demurred, stating that the iMac benefits from active cooling and a larger display but avoiding a direct comparison.

Assuming performance levels are comparable, it looks impressive for the iPad Pro 2021 as a laptop replacement, but potentially disappointing for the iMac as a desktop, especially since it costs slightly more than the iPad Pro with comparable specs.

For traditional gaming, the iMac is likely the better option of the two – unless you subscribe to a cloud gaming service.

Both the iPad Pro and iMac can run any iOS/ iPadOS app or game. If you want to step outside of the App Store and try games from Steam, Origin or GOG, iPad Pro users will be out of luck. iMac owners can play M1-compatible Mac games and get pretty decent performance.

Plenty of computer games are PC-only, which could limit your gaming library. But you can get around that on an iMac with a yearly subscription to Parallels Desktop: a Windows 10 virtual machine that lets Mac users use Microsoft’s OS on an Apple computer. Parallels v16.5 in particular is optimized for M1 chips, using less energy and giving you 30% better performance than you’d get on an Intel-based MacBook.

If you’re looking for more hardcore games, the iMac might seem like the slam dunk choice. But you can play these types of games on the iPad Pro using a game streaming service. Google Stadia, GeForce Now, Amazon Luna, and Game Pass Ultimate can all be played on iPads using a Safari web app.

Assuming you have a fast enough internet connection and router, your iPad Pro 2021 can stream the most graphically demanding games using remote servers as well as any gaming PC. Most Bluetooth controllers can connect to the iPad Pro, so you won’t rely on touchscreen controls. And you can play these games anywhere on the iPad Pro’s beautiful screen instead of being stuck at your desk with the iMac.

As a counterpoint, the iMac can also stream games through its browser or desktop apps, using an ethernet connection for more consistent stream quality. And it also lets you download games once instead of constantly burning through your bandwidth.

If you’re weighing the iPad Pro 2021 vs. iMac 2021 for gaming purposes, your top choice will vary based on what specifically you’re looking for. The iPad Pro 2021 wins for display brightness and refresh rate, price, and portable gaming. The iMac 2021 triumphs for display size, audio quality, ports, and access to desktop/ PC gaming.

Neither gives you the perfect gaming experience. For that, you’ll need to step away from Apple and look into gaming PCs or gaming laptops. But as competent gaming machines, either Apple’s new desktop or tablet could likely fit your needs.